I realized that I haven’t posted anything book-related recently. Nothing’s changed though. My days aren’t complete without a book in tow while in transit, or without having to flip through a few chapters before I call it a night.

As for my recent reads, thanks to the recommendation of Saturdays and Other Days, I’ve recently finished E.L. Konigsburg’s “Father’s Arcane Daughter”. It is a classic children’s book about Winston Carmichael, a rich kid who lives with his parents and sister, Heidi. He shares an amusing form of love-hate relationship with his sister (It kind of reminds me of my relationship with my brother while we were growing up) but in the same way, he also feels the need to be overly protective towards her just like a big brother should be. One day, a woman who claims to be Caroline, his supposed half-sister shows up at their doorstep. Caroline was her father’s daughter who was kidnapped and has been missing for years. The story pretty much revolves around the mysterious woman and how she affects their lives.

Doesn’t sound like a typical children’s book huh? I finished this in a matter of hours and I’m glad I finally got to read it. Where was this book while I was growing up? I look forward to reading “From the Mixed Up Files of Mrs. Basil E. Frankweiler” also from the same Newbery Medal-winning author. 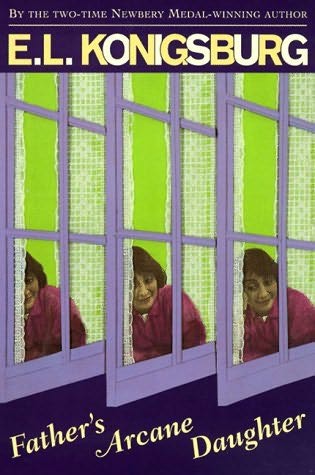 I have moved on from this wholesome title to a rather provocative series that the blogger behind http://mybrainpoppings.blogspot.com/ has allowed me to borrow. We have our usual book swaps and she made sure that I have enough books on my plate to last me a lifetime. Sometimes we don’t even see each other, we just have a common drop off point where we both pick up the swapped books.

I have a question, have you ever encountered a book where you simply can’t stand the book cover that it almost made you not want to read the book at all? True to the old adage “Don’t judge a book by its cover”, I’m glad I managed to get past the book covers of a particular series that I’ve been reading, in order to fully immerse myself in what they had to offer. Don’t get me wrong, I  still can’t stand looking at the covers but I was able to come up with some sort of a temporary solution.

Tadaaaa! Now I can read the books freely without drawing in some knowing stares from strangers. So why did I have to go through all the trouble of masking the book with newspaper? Let me give you a sneak peek.

Some parts are cropped but you get the picture. 🙂 Feel free to google the full images. It might make you gasp too.

These books are part of “The Nightwalker” series of Jacquelyn Frank. A paranormal romance series that I’ve never even heard of until the books landed in my fingertips. Admittedly, if I had seen these books in the bookstore I wouldn’t have given them the time of day, similarly to how I feel about book covers with Fabio on them. (Sorry no offense to the Fabio fans out there).

I finished reading Jacob first. Here’s a synopsis from the author’s website. To sum it up Jacob is a Demon Enforcer who is centuries-old. He is responsible for policing and punishing Demonkind should they overstep their boundaries and break certain policies. He is ruthless and is feared by many. One fateful evening in New York, he meets Isabella who happens to be human, and is a virginal librarian at that (this part made me cringe). Demons pursuing humans is considered taboo so he could not understand why he was so intensely drawn to her. Their encounter changes both their lives forever.

Here’s the good and the bad, at least for me.

The good part is, the story line is well thought-out which makes it such a gripping read. For a book with that kind of cover you wouldn’t think that it’s so action-packed where demons battle human black magic-users called Necromancers, and other paranormal forces come into play. Of course, it is also a tale of romance and seduction and sex just has to be an integral part of the story. But surprisingly, there are only about four or five lovemaking scenes in the book, though vividly described in about two to three pages per scene. Although I lack much expertise when it comes to judging what a good erotic fiction is, I find that the author was able to describe the steamy scenes in a more well-written manner as compared to another much-hyped erotic series. The scenes were more than just being hot and heavy, as it went beyond the physicality of things. The passionate scenes tap into some sort of spiritual and cosmic realm which I found to be pretty remarkable. And I guess the unique way of dramatically describing the act of lovemaking in this book can be attributed to the fact that we’re not exactly talking about two people going at it like rabbits. It’s about the nature of the characters who happen to be a demon and a human and how they go against taboo as they are joined as one and eventually discover a world where secrets are revealed, and hidden powers are unleashed.

I’ve also just finished Elijah, which is quite a page-turner as well. He is a demon warrior who serves the demon king. He is known to be quite brutal and shows no mercy as he faces his enemies. This time, a female lycanthrope is the object of his forbidden obsession so that pretty much creates a whole different dynamic and conflict in the whole “inter-species” scenario. I like the continuity of the stories from the other book to this one, and how each character whether flawed or not, becomes crystal clear in your head you can almost hear them breathe. And I think that’s the magic of a good writer. You feel like you’re seeing every pop of color and feeling every texture in your fingertips in the same way the writer designed it to be.

Now here’s the part where I rant a bit. Why do the female protagonists in these kinds of romance novels have to be inexperienced virgins? And why is it that it always has to take an experienced man with a lot of baggage to be the one responsible to sweep her off her feet and whisk her into a world of overwhelming passion? Does this formula sound awfully familiar to you? Although I do admire that the female characters in these books are strong-willed and are not afraid to put up a fight, but it just makes me wonder why it has to be the same formula each and every time (in the same manner I wonder why some book covers don’t give justice to the books themselves). Would you happen to know of any other romance title where the tables are turned and it’s the men that are the ones who are inexperienced and naive? If you do, please let me know. Seriously, for my peace of mind.

Some moments also made me cringe but I won’t talk about those anymore as it might give away too much just incase you’d like to give this series a try. 🙂 By the way, isn’t it funny that in Jacob, the star-crossed lovers just had to be named Jacob and Bella? But apparently, this series came way before Twilight so that’s that.

As much as I’d like to move on to Noah, I’m taking a quick break from the Nightwalker Series as I finally have a borrowed copy of this highly-controversial classic novel!

I’ve been dying to read this for the longest time! I already started perusing a few chapters this morning. Part of me is scared about what lies ahead, but I want to know how one book was able to elicit a myriad of opposing views all throughout the years and is still being talked about today.

So there goes my current reads. Care to share yours? 🙂

9 thoughts on “Mystery Women and Tales of Seduction”